History of The Dyckman Basketball Tournament 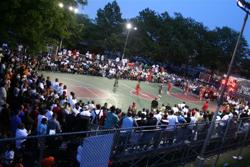 Held at Monsignor Kett Playground in Upper Manhattan at 204th Street and Nagle Avenue (off Broadway), The Dyckman Basketball Tournament was started in the summer of 1990 and has since expanded from a word of mouth league with six teams to a tournament that now host of over 100 teams in 9 different age groups. Over the past few years, the tournament has become one of the most highly anticipated and notable summer basketball events within the New York tri-state area. We are proud to acknowledge that since the inception of the tournament, murder, rape, robbery, assault, burglary, and grand larceny in the 15th congressional district have all dropped an average of 67% (NYPD COMPUSTAT UNIT). The tournament has been featured in the media on numerous occasions including ESPN’s The Life, Amsterdam News, BRONXNET cable channel 67, and FOX 5’s Morning Show.

Profile: Now in its 28th year, this NCAA & NBA sanctioned tournament, held seven (7) days a week, reaches up to 2,500 spectators daily during the summer. Over the past few years, the tournament has become one of the most highly anticipated and notable summer events within the New York tri-state area.

The purpose of the tournament is two-fold:

(1) Offer a platform for teams and participants to showcase their talents in an intensely competitive atmosphere where players can be recognized and possibly recruited;

(2) Offer the community and its residents a positive, fun and exciting recreational/entertainment activity for the entire family to look forward to, annually, each summer